A great contest is shaping up over the selection for the first, and quite likely only at least for a long time, site for a settlement on the Moon.

Currently available data is not adequate to definitively pick the winning location. Soon, enough new data will be available from missions like LRO to nail down the choice.

A good lunar settlement site must have a number of activity zones designated for specific purposes. Each of these activity zones will have very demanding requirements. Good travel routes and communications lines will be needed between each of the zones.

Habitation Zone
This zone for buildings needs to be fairly flat and smooth. It should be away from other sites that represent dangers, like the Landing Zone, and away from activities that will seriously kick up dust, like the industrial zones.

Landing and Launch Zone
This zone needs to be flat and smooth. You cannot land a spacecraft in a field of boulders. We nearly lost one or two Apollo missions to this problem. This zone must also be separated from other zones by at least 1 kilometer. It must have good access to orbit with workable emergency landing areas along probable emergency orbit paths.

Earth Communication Zone
This zone must have an unrestricted view of the Earth at all times for microwave antennas and laser communications telescopes. A glancing path near the lunar horizon could be a problem.

Solar power zone
This zone should have an unrestricted view of the Sun for as large a percentage of the time as possible. On the other hand, the more direct the light the greater amount of available power. What is the best trade off between near constant access and plentiful access? This question may be answered by the effectiveness of power storage, and current Lunar analogue station mission plans center around simulating periodic availability of power.

Scientific Interest zones
There should be zones near the settlement that contain features of scientific interest and zones favorable for doing scientific experiments or placing instruments.

Lava tube access
The most valuable terrain on Luna is underground, and nowhere is there easier and more plentiful access than inside a structurally stable lava tube. Lunar lava tubes are expected to be far larger than their terrestrial counterparts -- large enough for pressurized cities. Development without such advantageous terrain is likely to be far more expensive, especially with any scaling of population.

Industrial zone, the cold and the dark
This zone must have enhanced concentrations of volatiles and be suitable for industrial operations.

It will be very difficult to find one site with high rating in all these zone categories.

Rating various proposed settlement sites will require analysis of a lot of scientific data. Some of the data is available now. Some of it can be calculated with existing computers and software. And, some of the data will be taken by lunar missions over the next few years.

One of the best ways to organize such a large amount of data is in the form of maps. Here are a few maps that are critical to selecting a site that might not be obvious or of interest for other activities:

Slope
This is not the altitude but is a contour map of the absolute value of the rate of change of the altitude. All activities will have serious limitations as the amount of surface slope they can tolerate. For example, Apollo rovers were limited to a slope of 35 degrees in the extreme. All the settlement areas must be connected by ground transportation, therefore all areas must be connected by slope contours below the limits of our new rover designs. Areas not so connected might as well be on the far side of the Moon. We await the LRO data for this map.

Roughness
Many areas on the Moon are strewn with boulders and are therefore very rough. This type of train is unacceptable for landing sites and difficult to use for most other functions such as habitat or industry. You would need to put out a lot more energy and effort just to move the boulders off a site before it could be used. Roughness can be measured by radar reflection from Earth.

Percent Sun
This map is critical both for sighting solar power stations and for locating industrial activities requiring large amounts of solar power. This map can be calculated with existing software, but more precise altitude data will make improved maps possible.

Percent Earth view
This map is critical for communication with Earth. The problem is not important for equatorial locations, where the Earth is always high in the sky, but is critical in polar and limb sites. Microwave links that even pass near to the lunar surface experience considerable interference. The Earth view map can be calculated with existing software.

Science interest
This map can be a photographic one but must be supported with a detailed list of areas accessible from the site that have particular scientific interest or that would be good sites for setting up scientific instruments.

Mineral concentrations
This will be a series of maps showing the concentrations of valuable minerals in the area of the site. Of particular interest are the Volatiles, Ilmenite, and titanium. Rough versions of these maps can now be assembled from satellite data, but more detailed information of specific sites will be needed.

Your ideas here
There are many more important considerations.

Some time in 2009, the LRO data will start to flow. The American public will want instant science (they always do). They are paying the bills so they are entitled to some consideration no mater how much the scientists hate to be pinned down for instant science.

One way to handle this problem is to embrace it.

We could set up a contest between various interested groups who would champion various sites for a lunar settlement. Each group would partially build the case for a specific site with all available data. The groups could be in high schools, universities, industry, technical societies, or Internet groups anywhere on Earth.

When the LRO data goes public, it will already be in the form of sophisticated maps. The software that generates the standard maps will also be capable of generating specialty sight selections maps with only a small additional effort.

The game then becomes one of watching the LRO data like a hawk to find the times new data on your particular site will first become available. Then jumping on your data within minutes to provide new support for your site and move it forward in what will best be described as a horse race.

One special parameter to map is slope. Americans love their cars. They may not have a great interest in science but they will be fascinated by a lunar map lying out in what areas they could drive cars, what areas would require off-road vehicles, and what areas are just plain clefts you would drive off. It will also give the news people something they can deal with in the otherwise incomprehensible flow of data. This would be a reasonable accommodation to the special interests of the American people.

To make this work, Lunarpedia will really need to find somebody to put up some real prize money. Lunarpedia could make this happen.

Here are a few sites that have already been put forward: 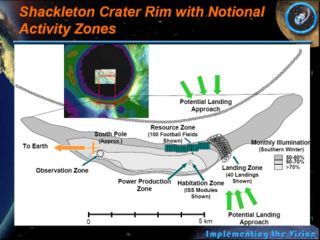 Crater Shackleton
This site is located almost on top of the lunar South Pole and has outstanding access to the cold and the dark. This site is detailed in NASA_Exploration_Strategy. 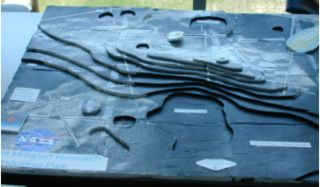 Mount Malapert
This site is about 125 kilometers Earthward from the lunar South Pole. It features a peak with eternal sunlight and good access to the cold and the dark. For more details see Malapert Park and [[1]] Malapert in Wikipedia.. 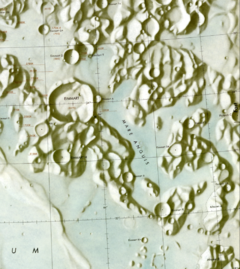 Mare Anguis
Northeast of Mare Crisium and referred to by many as Angus Bay,, this site has been deemed likely to be surrounded by multiple lava tubes and was selected for the Artemis Project reference mission. A great deal of work on a planned mission there is the cornerstone of the Artemis Data Book.

North Pole
North Pole, the cold and the dark

Pick your site now! The best ones will soon be gone!

In the end we must put a rover down on the top two or three sites for a detailed reconnaissance. No amount of orbital readings will replace the need for real ground data.

There is no reason the winning team should not have some input in the commanding of a rover exploring their site and early access to the data.