Artemis is an American Space program aiming to to land 'The first woman and the next man' on the Moon by 2024. Artemis was started in 2017. The target is the south polar region of the Moon. 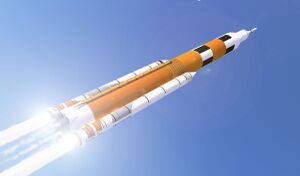 A spacecraft composed of a Crew module and a Service Module.

The Human Landing system (HLS) is the name of the proposed lander for the mission. Five proposals were made for the lander design, while three were chosen for further development:

SpaceX proposes a variant of their Starship design, without the Earth return features and adapted for landing on the moon. The flaps and tiles would be removed. Additional engines would be included high on the fuselage to reduce impingement on the lunar surface of the engine plumes. Simulations have shown that high thrust engines such as required for the Starship might fluidize the Lunar regolith and create dangerous landing conditions. Starship is still under development at this time.

The Artemis Accords are an international agreement for the principles of or cooperation in the civil exploration and use of the Moon, Mars, comets, and asteroids for peaceful purposes grounded in the Outer Space Treaty of 1967. The Accords were signed by the directors of the national space agencies of the United States, Australia, Canada, Japan, Luxembourg, Italy, the United Kingdom, and the United Arab Emirates on October 13, 2020. Ukraine became the ninth signatory of the accords on November 13, 2020.

Among other elements, the accords include an agreement that extraction and utilization of space resources should be conducted in a manner that complies with the Outer Space Treaty and in support of safe and sustainable activities. The signatories affirm that this does not inherently constitute national appropriation, which is prohibited by the Outer Space Treaty. They also express an intent to contribute to multilateral efforts to further develop international practices and rules on this subject. This opens up the possibility of mining and In Situ production operations that would be required for a Lunar settlement.