Difference between revisions of "Doing Without Space Suits"

The entire set of space suits would be an encumbrance to a moon colony. They are more suited to robots than to people. If a ditch needs to be dug on the moon's surface, a remote controlled power shovel is the tool to use. If a screw needs to be turned in the vacuum outside, a remote controlled screw driver on the end of a remote controlled robot arm is needed. Indoors, a man uses a screwdriver without a space suit. If a colonist needs to move from one place to another across the moon's surface, a vehicle with a pressurized cabin and an air lock that can mate to the air locks of colony living quarters is preferred as transportation over a space suit. This is described in Air Lock to Air Lock Transfers#Air lock to Air Lock Transfers, just ignore the mention of a space suit in the description. Being able to scratch ones elbow and otherwise be comfortable and able to move quickly are advantages of a motorized vehicle with a pressurized cabin. For redundancy a vehicle can have two sections separated by a set of pressure tight doors with independent sets of legs and life support equipment for each section. That kind of redundancy is hard to get with a space suit. When people arrive on the moon by rocket, They should be in a passenger compartment that doubles as a land vehicle. A mobile platform from the colony should come up to the descent vehicle so the cabin can detach from the lander, walk onto the platform, and be lowered to the ground. Then it can walk to the colony air locks.

To produce a successful human colony on the moon, people must be able to imagine what the successful colony is like before it is built. The division of labor between remote controlled devices and people doing hands on work should be this: Robots will do all work outside in the vacuum and robots will do routine easily automated industrial tasks indoors. People will work inside pressurized environments doing tasks that are not easy to automate. Such tasks include analysis of samples brought in from the lunar surface for scientific and economic significance, analysis of production samples to determine the efficiency of industry, repair of machinery, and fabrication of small numbers of devices. When some of this work involves working with machines or materials that would be harmed by exposure to oxygen or moisture, a person can wear a Self-Contained Isolated Breathing Apparatus (SCIBA) in a compartment pressurized with inert gas or some other non-oxidizing gas. A SCIBA does not restrict a person's dexterity and mobility as much as a space suit does, because it is worn in a one atmosphere pressure environment instead of in a vacuum environment; and so has no tendency to blow up like a balloon and assume one particular shape. Also there is no long preparation time of breathing low pressure pure oxygen before using a SCIBA. It works with a breathing gas that is at one atmosphere pressure, 20% oxygen just like the inhabited portions of the colony. If for any reason a task usually handled by remote control from Earth is not so handled, the task can be undertaken by remote control by a person on the moon, or it can be handled by a person in a surface vehicle using attached manipulators. A space suit will not be necessary for any tasks on the moon.

For some tasks on Earth screws are made with hex heads to be turned by a wrench and also a slot for a screw driver. This is typical of customer assembled furniture in which the manufacturer wants the customer to be able to assemble the product even with a deficient set of tools. There should be no similar situation for colonists on the moon using either a space suit or a remote controlled tool. There should never again be any space suits on the moon. Designing a task for two means of operation is an expense to be avoided. For redundancy, more than one remotely controlled device should be available for a task outside, more than one person to control available the task, and more than one radio control frequency or laser control frequency. 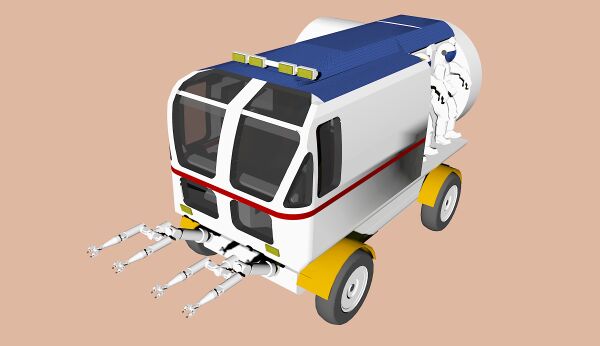 Although there are space suits illustrated, the idea that the less the better may well apply to their use.

Besides colony air lock doors to mate with vehicle air locks, there should be air lock doors big enough to admit an entire vehicle to a repair shed when needed. A possible minimum sized vehicle for a man moving on the lunar surface could be a two meter (79 inch) high 66 cm diameter vertical axis cylinder with hemispherical end caps top and bottom, and external arm and leg type manipulators attached fore and legs aft. Another possibility is an 84 cm diameter 135 cm long horizontal axis cylinder with legs beneath and arms in front. These vehicles would have advantages over space suits as above. Certainly there could be much larger vehicles also which would have other advantages. An example of a legged vehicle is the BigDog[1] rough-Terrain robot. To operate outdoors on the moon this robot would need an atmosphere-containing, dust-shedding covering and alterations to operate on electricity and withstand the thermal threats. No new science is required to develop walking robotic vehicles for the moon. Long lasting power supplies will be a concern. Most proposals for rovers, for example the NASA MMSEV, include external tele operated arms to reduce the need for leaving the vehicles.

For example: Automobile manufacturers use paint robots to paint cars. One reason is that the environment in the paint shed is often toxic to people. [2] The robots sometimes also require protection which can sometimes be provided by putting plastic bags around the robot. It is easier to protect robots than to protect people. The environment of the lunar surface is more challenging than the environment of a paint booth. So, people should use robots to perform the tasks that need to be done there.

Humans on the moon

Taking into account the cost of maintaining people on the moon, the choice for initial agents to establish industry there becomes clear. Robots, not people in space suits should be used. One source estimated that the cost of having four people on the moon for a year would be 36 billion dollars.[3] However, since these numbers were proposed, launch costs have gone down significantly, and SpaceX is proposing the Starship vehicle that is designed to provide transportation at a fraction of these historical numbers. Nevertheless, robots and in particular remotely operated vehicles and machinery remain a very attractive alternative to people in space suits.

Supplying humans from Earth will remain expensive. However, when the resources for supporting people on the lunar surface come from local industry, then the cost will come down even further and people will be doing work inside that does not require space suits. The costs of supporting people on the moon include waste water treatment. These costs tend to get less per person as the number of people increases.