Difference between revisions of "Featured Articles"

This device is the central feature of a spacecraft carrier that receives spacecraft into orbit as an aircraft carrier receives aircraft that land on its deck. It works by having a long slotted aluminum tube in orbit and having the shuttle vehicle that is launched to orbital altitude enter this slot while the tube is moving by at orbital speed. The shuttle only needs to reach orbital altitude to enter the eddy current brake tube. That can be 10 kilometers on Luna at the perilune, an altitude that can be reached with 188 meters per second mission delta v, including gravity loss, a few seconds maneuvering fuel, and a small safety margin. Magnetic flux from permanent magnets deployed by the shuttle is directed at the walls of the tube causing a repulsive force and a retarding force.[1][2] By reducing the speed of the shuttle relative to the orbiting aluminum tube, the shuttle is brought up to near orbital speed. Since eddy current braking loses effectiveness at low relative speeds, friction braking is used to give the shuttle the last 18 meters per second to reach orbital speed and match velocity with the aluminum tube. During all the time that the relative speed of the shuttle and the aluminum tube is greater than 18 meters per second, there is no contact between the material of the shuttle and the material of the aluminum tube. ...(read more) 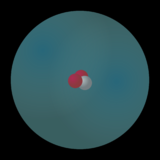