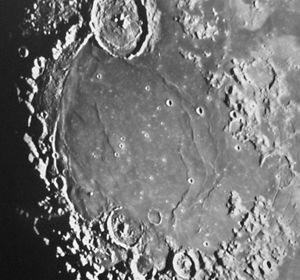 Lunar lavas generally erupted from fissures, which poured out and ponded in the geographically lower plains (fig 2: this image, from the Hawaiian Islands, shows the fissure left from a ‘fissure eruption’).

However when erupted onto an inclined surface, the lava could flow downhill and even create river-like channels from thermal erosion. On the moon, these formations are called ‘sinuous rilles’ (fig 3). 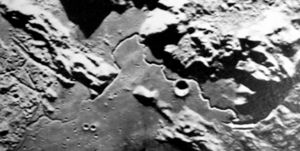 Some run up to several hundred kilometers before finally spilling their lava onto flatter surfaces.

This process of mare flooding resulted in large, flat lava sheets that covered the basins (cf. Fig 6, where a lava flow is marked by short, black lines). 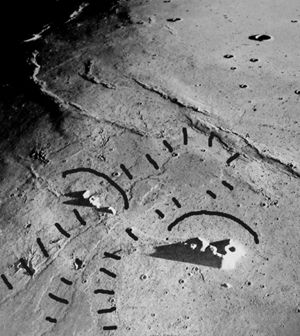 Because the basins were concave in shape, lava was thicker in the center of the basin and thinner towards the edges. Now lava is denser (heavier) than the surrounding crustal rock, so it ‘compresses’ the bedrock underneath (a process generally called ‘subsidence’). The thicker areas in the center do this more than the thinner areas out at the edges. This changes the shape of the basin from a ‘flat’ surface to a very gently sloped ‘bowl’ shaped surface. This produces three unique formations.

First, it created unique, ‘target like’ surfaces. As the first lava flow subsided, the center would ‘sink’ and the outer areas remain raised. The next flows preferentially filled the lower central areas. Since each large eruptive event(s) had a slightly different composition, the ‘colors’ of the flow would also follow that pattern. This produced a ‘target like’ appearance to certain of the maria, with the outer bands representing the older flows, and the inner bands the younger ones (fig 4: the solid line shows the outer edge of the basin; between it and the dotted line, the older lava is still visible; newer lavas ponded in the center, covering all but the outer edge of the older lava). 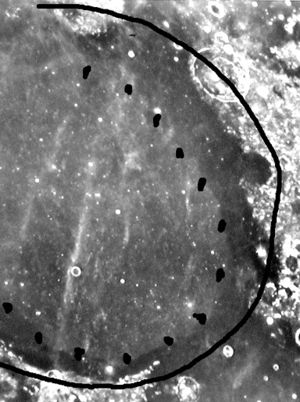 One of the best examples of this is visible in Mare Serenitatis, and can be seen with telescopes of any size. 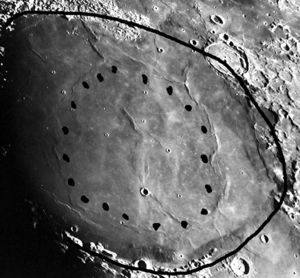 While there are several types of mare ridges, these are identified by forming a ring within the mare, and are often associated with small peaks that represent the highest points of the flooded basin ring (fig 6; the dark semicircles indicate peaks, while the short lines mark a lava flow).

Third, this process of subsidence put stresses on the lava bed and in the bedrock underneath. This rock was already deeply fractured from the basin impacts, and these new downward and inward stresses caused some of those faults to activate. They opened up creating a series of ‘grabens’ (grabens occur where two parallel faults are ‘pulled apart,’ with the center section falling down; this produces a flat bottomed valley). On the moon, this specific type of grabber is called an ‘arcuate rille’. These are only found around the edges of lava filled basins (fig 7). 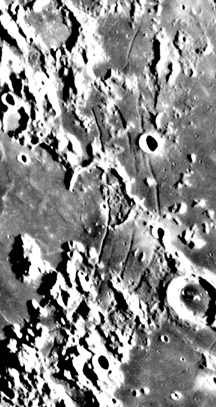 The best examples are those around the Mare Humorum, and are visible in small telescopes on a steady night. 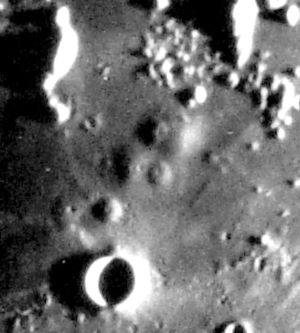 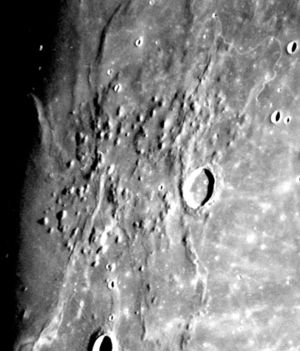 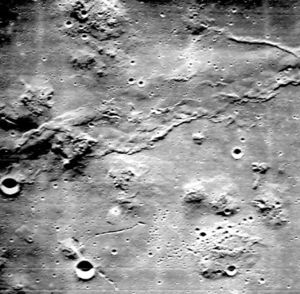 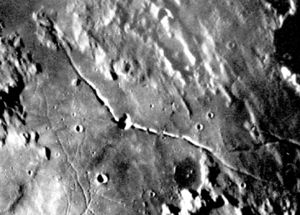 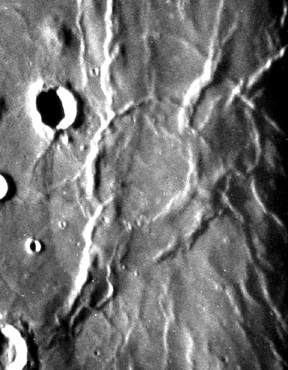 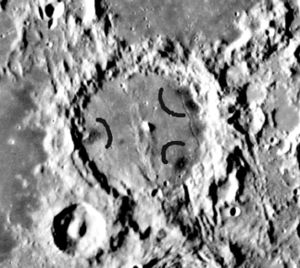 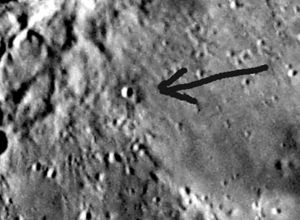 Figure 14
A more recent impact within the ejecta of Crater Copernicus
Retrieved from "https://lunarpedia.org/index.php?title=Geologic_Processes_on_the_Moon/Volcanism&oldid=13278"
Categories: