On most of Luna a roving robot explorer must either be made to endure 354 hour days followed by 354 hour nights or be considered a disposable rover. If we can not build things to continue operating a few years at a stretch on Luna, we might as well forget about a lunar base. This article suggest sample solutions to show that solutions exist. Better sollutions than these will be developed.

The Apollo astronauts used expendables for thermal management and recycled nothing. We can not use up expendables at that rate for years for robot explorers. Thermal management for lunar rovers is possible with radiators that do not use up expendables. One scheme is related to the simpler thermal management of a stationary base. At the equatorial region a wall could be set up running east and west and inclined away from the nearest pole by an angle equal to the latitude. The top of such a wall can be covered with reflective aluminum and that is the only part of the wall that the sun strikes. A trough shaped aluminum parabolic reflector can be built to shield the wall from the surrounding hot lunar landscape and reject incident sunlight to space. Such a trough would have a cross section in the shape of the curve that graphically represents y=x^2 over the range of x=0.7, y=0.49 to x=-0.7, y=0.49 while the cross section of the wall would be represented by the line segment from x=0, y=0 to x=0 y=0.2. Sunlight that strikes the inside of such a trough will be focused above the wall and return to space. The wall can house a radiator shaped and coated for high emissivity. This radiator would be effectively shaded from sun and hot lunar terrain and radiate to the cold of space. By circulating a solution of water and ethylene glycol through this radiator cooling can be provided for sensitive equipment without throwing out any mass of evaporated liquid. Shrink this concept so that it can be carried by a rover and the rover should survive the day. The rover using such a radiator would best have six or more legs, so it could walk any direction without changing its heading. 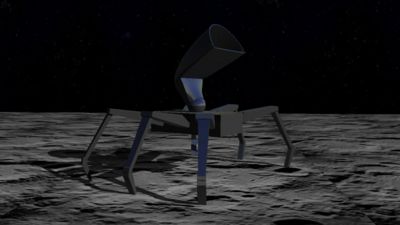 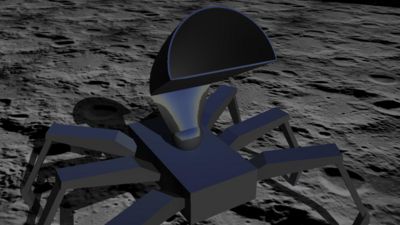 The above design concept for a radiator shield is best suited for buildings. For a rover that would turn to all compass directions rather than traveling all various directions while maintaining a constant compass heading, there is an alternate radiator shield shape. A half paraboloid of revolution about the x=0, z=0 axis. The particular shape is y equals ((x^2)+(z^2)) in the range of z is positive and y ranges from 0 to 0.8. That curved surface would be formed of reflective aluminum foil along with the area of the z = 0 plane greater than y = x^2 greater than y = 0.2 and less than y = 0.8. Heat would be radiated out through the area of the plane z = 0 where y is greater than x^2 and less than 0.2. The heat would be reflected out along the positive y direction with the x=0, z=0 axis pointed at the sun. The radiator would have a circular shape on the top of the rover. An articulated section of the radiator shield would be composed of sections of spherical surfaces and a tube connecting the space enclosed by the sections of spherical surfaces to the paraboloid section of the shield. Pivots on opposite poles of the spherical sections would allow their turning about a horizontal axis while the pivots would be mounted on the radiator by a ring bearing allowing rotation about the vertical axis. The axis of the paraboloid should be able to point 360 degrees about to front, rear or side and vary in elevation from forty to ninety degrees from horizontal. When the sun is 40 degrees or more above the horizon, the axis of the paraboloid is pointed at the sun. When the sun is in the sky below 40 degrees of elevation the axis of the paraboloid points to the cold black sky along the azimuth opposite the sun. The radiator may need to be a larger fraction of the rover's surface area than indicated by the picture. Cameras, comunication antenas, and manipulator arms are not shown but left to the reader's imagination. 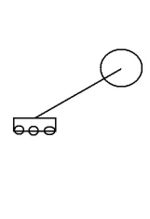 The solar cells for a rover could be stuck up on a pole and spread out to form an umbrella. The pole would be manuvered to provide shade for the radiator. The pole should be long enough that the infrared radiation from the bottom of the umbrella mostly misses the rover. The umbrella pole does not need to be so long if a second umbrella on the same pole is between the solar panel and the rover. The second umbrella would be the same diameter as the first, and from the shade of the first umbrella could radiate enough heat so that it would not be a significant source of radiant heat itself.