Difference between revisions of "Malapert Park" 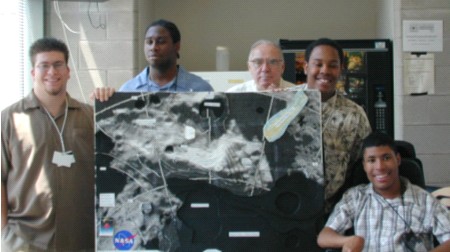 This is the text, with illustrations, of a presentation by the Malapert team on August 4, 2006. The team wrote and delivered a sales presentation for a research and industrial park proposed for a site near the south pole of the Moon. This work was done at the NASA Goddard Space Flight Center as part of the High School High Tech summer student program.

We're here to tell you about the Mount Malapert Research and Industrial Park. It is the most valuable real-estate off the Earth and is located near the South Pole of the Moon.

Dr. Harrison Schmitt is the only scientist ever to walk on the Moon. His new book, Return to the Moon 1, is a detailed study of harvesting resources on the Moon. It is the basis for our plan.

The Plan is for people to return to the moon and mine helium3 to address the world's current energy source. We have used up half the world's oil. We cannot switch to other carbon-based energy sources. We must reduce the carbon dioxide we dump into the atmosphere.

We need a new energy source that won't pollute the atmosphere, and will provide a lasting source of energy. That energy source could be helium-3. 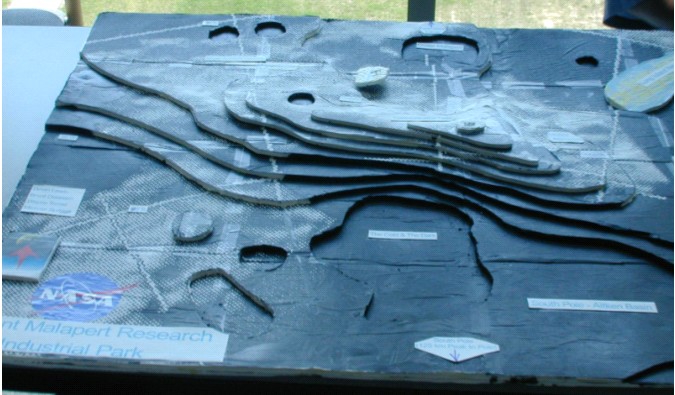 Let me give you a feel for where the Mount Malapert Research and Industrial Park will be located.

Mount Malapert is a mountain ridge, comparable in size to Long Island, New York. In other words, this is a large mountain. It is on the Earth side of the Moon and is the biggest mountain near the Lunar South Pole. The distance from the peak of Mt. Malapert to the South Pole is approximately 125 km (78 miles).

On the Peak, there is sunlight available almost all the time. From the peak, the sun will appear low in the horizon, and circle the sky for one lunar day (29 Earth days). This is a great site for a field of solar panels.

Coming down the Earth side of the mountain, the Earth is visible all the time, so this is the perfect sight for high-bandwidth communications systems.

Moving down the mountain in the direction of Earth, we find a large area of highland plains. This area has gentle slopes, good access to every other site, and space for dozens of prime leases. This is also the best place for settlement and support facilities like a landing area.

This is the first of the two excellent places for helium-3 mines. A typical mining lease might be the size of the Washington DC beltway. The mines in a lease this size could provide Helium-3 for a major regional power plant on Earth for many years.

In the Cold and the Dark

Moving off the mountain into the basin area behind it, we find an immense cold finger.

A cold finger is a region that is not exposed to sunlight. It is constantly exposed to the cold night sky and becomes very cold. There volatile particles accumulate for many millions of years. When comets hit the moon, the volatile materials form an extremely thin lunar atmosphere. During the day, these particles are heated and can move around. Many of the molecules are lost in space. Some of the particles stick to the dirt again the next night. If these happen to fall into one of the cold traps, they will never be heated again. They accumulate there for billions of years.

This dark region is also an excellent site for scientific instruments. There are many places in this basin that are:

We are currently in a world energy crisis. You see it at the gas pump, and you see it in your energy bill. The world runs on oil. As of now, we have used up about half of all the oil the human race will ever use. We must find a new source of energy before the rest is gone.

At the same time, we must reduce our carbon dioxide emissions. It is clear that this greenhouse gas is changing the Earth's climate.

We now need energy sources that could free us from our dependence on foreign energy, reduce pollution, and provide clean energy for years to come.

This complex problem requires a multi-faceted effort to provide solutions. Solar energy, hydro-electric, wind; We need them all!

The core solution to this problem has to be one or more sources of energy that can provide the world with a massive base level of reliable electricity. The current baseline energy source, coal, produces electricity, but at the cost of pollution and carbon dioxide emissions.

Nuclear fission is with us today, and could be scaled up to provide the entire needs of the planet for a very long time. But only at great risk and at a high social price.

Nuclear fusion is one of the few approaches that hold promise for this baseline energy requirement. Fusion has not reached the commercial level, but large amounts of research have shown that generation of base level electrical power is a possibility. Now, with the focus of the energy crisis, strong efforts to make Fusion commercially viable are in action. Yet even though billions of Dollars and Euros continue to be spent, progress is slow, and there is no prediction as to when these efforts will bear fruit. For the last 40 years proponents have claimed we are "ten years" from breakthrough. Today, we seem hardly any closer to breakthrough than we were 40 years ago.

We need ALL the solutions for the energy crisis. Helium-3 from the moon is probably the most exotic, but we have the technology to extract He3 if fusion power is ever realized. Big problems require big, bold solutions.

Solar Power Satellites (SPS) represent an even better solution than fusion, which can also provide baseline power with zero emission. SPS has the distinct advantage over nuclear fusion that no new technology breakthroughs are needed. SPS can be built using incremental advances on existing technology.

There is no doubt this is going to be a huge project. A project this big will require both government funding and private enterprise participation.

The public sector is already in action.

The Lunar Reconnaissance Orbiter Mission will get the science we need. It is being managed by NASA's Goddard Space Flight Center and will launch in the third quarter of 2008.

The transportation system that we need is currently being developed as NASA's Exploration Architecture. This program includes both a manned space craft and a heavy lift vehicle.

The Vision for Space Exploration 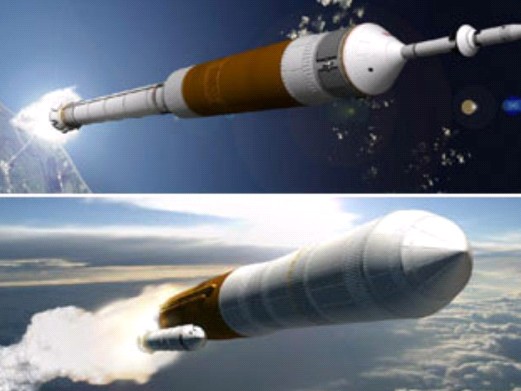 It is time to get the private enterprise sector going on this project. We can do this job. 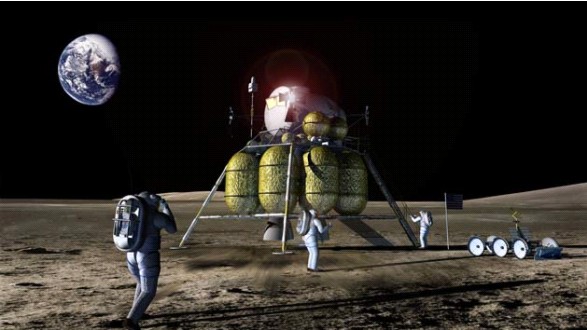 Now I would like to speak to those in the audience who are enthusiastic about settlement of the moon, and soon.

Settle on the Moon, Soon

A practical plan to settle the moon must demonstrate real economic benefit to Earth. This plan must include workers on the moon as well as robots. Our plan meets both of these requirements.

Retirement on the Moon

Here's a breakthrough idea in our plan. Many of our early workers will retire to the moon. They will contract for a one way-trip.

These will be people in mid-career. They will travel to the moon and live in limited facilities. They will first set up the mining operations. Over time, they will expand living facilities so that the next wave of workers can live in a real settlement.

Even if you personally don't get to go to the moon, there will be plenty of opportunities to participate in the program.

For one thing all of the workers on the moon will be accompanied by a safety buddy. Each moon worker will have a companion robot operated from Earth. These will be similar to the Spirit and Opportunity rovers on Mars.

Astronauts will have to exercise two hours a day. Exercise machines can be a real bore. What we need is some new sports that involve astronauts on the moon and people on the Earth involved in a single sport. This opens up a whole new sports area for teams, television, and Earth-bound enthusiasts.

Let me now talk for minute to the adventure capitalists among you. You are the people who will build the new businesses that will generate the new jobs for the 21st century.

This plan is the opening of the window of economic opportunity. NASA is providing a new national vision and building new space capabilities.

Also, the energy crisis is both a great problem and an opportunity. There will be winners and there will be losers. Some of the new winners will be players in space.

Such windows seem to close so soon after they open.

The 21st century is the age of information. Powerful new research is going on in aerospace and energy. This will be a huge opportunity for entrepreneurs to expand the commercial opportunities.

To make helium-3 from the moon work, we must solve many problems. The solutions to these problems will soon be ripe for development.

The commercial operation on the Moon will make available many materials available for space operations. These include: hydrogen, water, iron, and titanium. These materials will greatly reduce the cost of operations in space.

There are many powerful commercial opportunities available. The window has just opened; it will close soon. The time for action is now.

The 21st Century is Not for the Faint of Heart

We can meet these challenges. We Can-Do!