Difference between revisions of "Orion (CEV)" 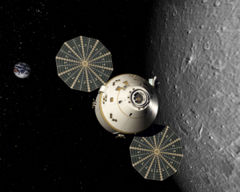 Orion is the name of the vehicles for the proposed NASA mission to return to the moon. These missions are set to be the first manned missions to the Moon since the end of the Apollo program in 1972.

In addition to testing the Ares Boosters, the Orion Spacecraft and the Lunar Surface Access Modules (LSAMs), these missions will establish a Lunar base near Malapert crater.

Ares 1, the first test flight, will test the first stage of the Ares I vehicle, which is essentially a Space Shuttle SRB, with five segments rather than four. It is a two-minute suborbital flight. This will be followed by a series of tests of the ascent abort system.

Ares 2 will be a suborbital flight of a boilerplate version of the Orion capsule and ascent abort system, presently planned for September 2012.

One year later, Orion 3 will carry an unmanned, but operational Orion Spacecraft for a two-week mission to an ISS inclination orbit.

Orion 4 will be an unmanned rendezvous with the ISS in June 2014.

Orion 5, slated for September 2014, will be the first manned flight of the Orion vehicle will carry a crew of two and have at least one EVA, much like the flights in the Gemini program in the 1960's. At this point, there has been talk of an Apollo 8 style mission , with an 'Orion' space In December, Orion 6 will dock as an unmanned cargo carrier for a 90 day mission to ISS. Unlike the current Russian progress" missions, the spacecraft will be able to return items to Earth, rather than burning up in the atmosphere At this point, there has been talk, mainly by Scott Horowitz, NASA’s associate administrator for exploration systems, of doing an Apollo 8 style mission, this a Orion spacecraft launched on an 'Ares V' booster for a circumlunar mission. One key objective of such a mission would be to conduct a full-scale test of a skip-entry technique that would give NASA greater control over where the Orion capsule lands when it comes back to the Moon. This would be done mainly to test the heat shield at lunar velocity. Alternatively, a scale model , launched on a Delta 2 launcher could test the Skip entry technique as early as 2011. Orion missions 7, 8 and 9 will be a 180-day mission to the ISS and Progress-type resupply missions to the ISS, starting in May 2015.

Orion mission 10 and 11 will also be a Soyuz/Progress mission to the ISS. Orion 11 is the initial flight of the Ares V, the HLLV of the constellation program. Like its Saturn V predecessor, the first payload will be a dummy payload to test its systems. The second flight of the Ares V will carry the first operational LSAM and will be launched in conjunction with Orion 12. 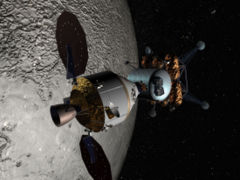 NASA Image of Orion with LSAM

Orion 12 will dock with the vehicle and ferry it to low Lunar orbit (LLO). The LSAM will then automatically land on the Lunar surface, launch, and dock with the Orion 12. The crew will remain aboard the orbiting vehicle. There has been some thought given to using the LSAM as part of the base to be established on the next mission.

Orion 13 will be the first manned landing on the Moon since Apollo 17. At the time of this writing, no further mission plans have been released, however, the long-term plan of using Orion to build a permanent base near the south polar of the moon has been officially announced by NASA. It is now clear that the initial Lunar landings will be to set up a base near Malapert crater.