Difference between revisions of "Peter Kokh" 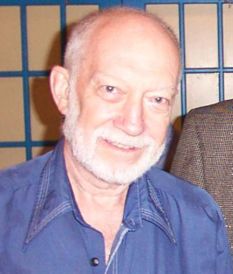 Peter Kokh was born in Milwaukee, Wisconsin, where he still resides, about four years before Pearl Harbor and the start of World War II. He became an early reader and, on picking up a coffee table book his parents had about nature, found a couple of brief chapters on the planets and stars. We didn’t know much back then. It was thought that Pluto might be as large as Earth, that Mars likely harbored vegetation and even the remnants of a dying civilization ingeniously clinging to existence as the planet continued to dry out and get ever colder. Venus was imagined to be a hot, steamy jungle planet, or perhaps a planet covered completely with a hot global ocean. His keen interest in the solar system and the stars, especially nearby ones, led to his devouring science fiction novels as fast as they came out. Back then, Science Fantasy did not swamp the market as it does today.

After four years in a Jesuit boarding high school, Peter enrolled in Marquette University in Milwaukee. After a year, he entered a seminary of a missionary order, studying four years in Pennsylvania and 15 months in England before deciding that his calling was elsewhere. Returning home and reenrolling at Marquette, he majored in philosophy, ultimately earning the wrath of the powers that be who held the thirteenth century philosophy of Thomas Aquinas as the standard for judging all thought.

Asked to leave on the eve of getting his masters degree, he decided to seek employment exclusively in blue collar industrial positions, so that, come the end of the day, his mind would remain fresh, rather than fried, ready to read, ponder, and write. After losing his job in a plant closing in 1989, he relied solely on his handyman skills to pay the mortgage and buy food, repairing homes and making custom improvements with his customers almost exclusively in adjacent inner city neighborhoods.

A decade later, as the 1970s progressed, he had become disappointed, almost bitter, that we had abandoned the Moon after the Apollo 17 mission, and that the three scheduled missions already planned were canceled by Nixon. Kokh joined NSS, at that time NSI (National Space Institute) as "Life Member #2" shortly after it was founded by Werner von Braun in 1974. He joined the new L5 Society, after seeing an ad for it in the back of a science fiction novel, a few years later.

About this time he decided to write a science fiction novel about where we would be (whenever the novel was finished) had we not turned our backs on the Moon. He was a “Mars man” back then, but realizing that we would have to create a presence on the Moon first, took up the challenge of how we would do this, given that the Moon lacks so many elements that are abundant on Earth. In the process he became thoroughly engrossed with the challenge of the Moon. He did not make much progress writing the novel as he was concentrating on doing the research that would show how we could be self-supporting on the Moon despite its apparent lack of “critical” resources. The Moon is like Japan, in that respect, and the lesson is clear. The resources that matter most are ingenuity and resourcefulness. The Moon could be the Japan of the Solar System. By odd coincidence, Kokh’s name predicts his fascination with what we can do with the Moon’s rocks: it literally means (in Greek and German, respectively) Rock Cook or Rock Chef!

Then in the spring of 1985, he had the opportunity to tour a uniquely different earth-sheltered home in the kettle moraine area 25 miles northwest of Milwaukee. Here, architect-builder Gerald Keller (German for "cellar") had built a most unusual underground home. There was no south window wall exposure to the warming sun (i.e. “passive solar”.) Keller's 8,000 square foot home (roughly 800 sq. meters) was totally underground except for the north-facing garage door. Yet the house was absolutely awash in sunlight, more so than any conventional aboveground house he had ever seen. Sunlight poured in through yard wide circular shafts spaced periodically through main room ceilings. These shafts were tiled with one inch wide mirror strips. Above on the surface, an angled cowl**, also mirrored on the inside, followed the sun across the sky from sunup to sundown at the bidding of a computer program named "George" (undoubtedly of "let-George-do-it" fame).

And, even more amazingly, through an ingenious application of the periscope principle on the scale of picture windows, in every direction you could look straight ahead out onto the surrounding countryside, even though you were eight feet underground. he felt far less "shut in" than he did in his own Milwaukee bungalow. In fact, he had never felt so open to the outdoors in any above surface home. This was a eureka moment for Kokh. Future Lunan pioneers may well have to live underground as foreseen in Robert A. Heinlein’s novel “The Moon is a Harsh Mistress.” But they would not have to live like moles. They could take the sunlight and the views down under their moondust blanket with them! For a more complete account, see: http://www.lunar-reclamation.org/mmm_1.htm . Indeed, this moment became the wellspring for his conviction that we could make ourselves “at home” on the Moon, one of the themes that dominates his writings.

The following year, a result of an L5 Society chapter colonizing effort by members of the Chicago and Minnesota chapters, August 23, 1986, he helped co-found the (Milwaukee) Lunar Reclamation Society (L5) that fall. He led the chapter into the National Space Society two months before the L5/NSS merger in 1987, Making it NSS’ first chapter. All the other L5 Society chapters came in when the merger document was signed at ISDCspacep 1987 in Pittsburgh.

With Larry Ahearn and Charles Moore of the Chicago Space Frontier Society, Kokh was an active "colonizer" in the late 1980's, helping start half a dozen new chapters. He served as Region 6 director on the NSS Board of Directors in 1991-2. He was chair of ISDCspacep '98, held in Milwaukee. And in 2001, in fulfilling a commitment he had made as Chapters Assembly president in 2000, he created and continues to maintain the Space Chapter Hub website to provide a common resource watering hole for chapters of the National Space Society, the Mars Society, and the Moon Society. He has served on the Moon Society Board and as Moon Society Chapters-Coordinator since the fall of 2002. He was elected President of the Moon Society in 2004, and reelected in 2006, and shortly after was named to the National Space Society Board of Advisors.

But Kokh is best known as the editor and principal contributor to Moon Miners' Manifesto. Known widely as "Moon Miners" but referred to by Peter as "the Manifesto," MMM began service as the Milwaukee chapter newsletter, but within months the Seattle L5 chapter came aboard. Published monthly continuously since December, 1986, MMM celebrated its 20th anniversary with the December 2006 issue #201. MMM began serving the members of the Artemis Society with the November 1995 issue, #90. Currently MMM serves several other NSS chapters as well as the members of the Moon Society, its principal client.

Kokh’s education and self-education has been encyclopedic in character, in all the sciences, literature, history, philosophy and more. Combine that with a great variety of work experience, and he has been able to approach space frontier topics from a wide variety of angles, without the horseblinders that are the bane of those whose expertise has been too narrowly focused. This shows in the great variety of topics covered in Moon Miners’ Manifesto, and in the many angles from which each topic is approached.

In the mid-1980s, in a climate of despair that NASA had lost all interest in the Moon, there was much discussion of the idea of a privately funded Lunar Polar Orbiter that would search for water-ice in the permanently shaded craters in the Moon's north and south polar regions. A number of paper studies were being circulated. At the National Space Society's International Space Development Conference in Denver in May 1988, Kokh and Dr. Gay Canough began brainstorming strategies to take this discussion out of the realm of paper studies and on to the road to realization. Quickly joining forces with three other very interested persons (Greg Maryniak of Space Studies Institute, Rick Tumlinson also of SSI and just then founding the Space Frontier Foundation, and Jim Davidson of the Houston Space Society) the group brainstorming led to the Lunar Polar Orbiter Conference held in Houston in March, 1989. It was at that event that Dr. Alan Binder came aboard to lead the design study. And the rest is History. Lunar Prospector orbited the Moon in 1998-9 and far outperformed our wildest expectations. The lesson that determined activists could actually accomplish something of real significance was a powerful one. - A more complete account. [1]

With David A. Dunlop, Kokh was a co-founder the Lunar National Agricultural Experiment Corporation (LUNAX) [2] in 1990, and with Dunlop and George French, the Wisconsin Space Business Roundtable in 1991.

He also launched the "First Contact Science/Science Fiction Science Convention" (Milwaukee) in 1994. Gregory Bennett, whom he had met in May of 1995 at the organizing convention in Huntsville, Alabama for Artemis Society International, was his Science Guest of Honor the following year. Within months, Artemis Society International adopted Moon Miners' Manifesto as its official newsletter. In July 2000, the ASI membership was transferred to the new Moon Society and MMM came along as part of the package.

Kokh has also tried his hand as an amateur space frontier artist by experimenting with "lunar paints" made entirely from materials producible from moondust. [3] A proud Milwaukeean all his life, Peter's hobbies include astronomy, hiking, his dogs, running a website for his "challenged" inner city Milwaukee neighborhood [4], and keeping up his home and Wisconsin north woods cottage.

Despite his focus on the lunar frontier, Kokh retains his keen interest in the opening of the Martian frontiers and believes the economies of both frontiers will thrive together or die separately. As Chair of the upcoming ISDCspacep 1998, he gave Robert Zubrin a plenary session opportunity to announce the founding convention of the Mars Society three months later. He is an active member of the Wisconsin Mars Society chapter [5] , and is a veteran of two 2-week long crew rotations at the Mars Desert Research Station outside of Hanksville, Utah. He served as an assistant engineer on Crew #34 in 2005 being involved with retrofitting the Hab with new electrical and plumbing systems. A year later, he commanded Crew #45, the first Moon Society crew to MDRS (“Artemis Moonbase Sim 1”) conducting simulation projects that would be valid in either moonbase or Marsbase situations. In the process of evaluating these experiences, he has become convinced that the logical research goals of Mars and Moon analog stations are quite different from one another, and that if moonbase simulation exercises were to be pursued further, this would require a very different outpost architecture in a very different geological setting.

In August of 1997, while getting ready to chair ISDCspacep 1998 to be held in Milwaukee, he sustained a serious ankle injury in falling from a collapsing extension ladder, and ultimately was put on disability until that changed to Social Security at age 62. He has been effectively retired since that accident, but busier than ever writing and striving to lay foundations for the future.