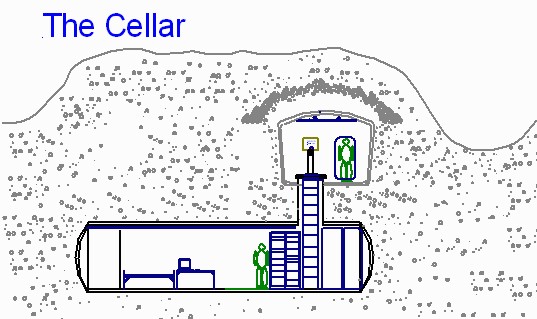 The Radiation Problem when living on the Moon

The Earth provides two types of radiation shielding critical for life: atmospheric mass and magnetic field. The Moon has neither type. On the Moon, our architecture must provide all our shielding, see Architecture List. Any lunar settlement design that does not address the radiation problem should simply be rejected as unsafe. The radiation hazards on the moon includes all the spectrum of radiation (Non-Ionizing Radiation and Ionizing radiation).

The Earth protects us and we must copy that protection on the Moon.

The Mass of the Atmosphere

The first shield is simply the mass of the atmosphere which simply blocks radiation. The Earth's atmosphere has a mass equivalent to about 32 feet of water. A blanket of two meters of regolith provides the protection needed against the background lunar radiation but more is needed for the occasional major radiation events. For a more detailed discussion please see Roof Support for inflatable lunar structures.

The second shield is the Earth's magnetic field. This field diverts most of the radiation coming from the Sun into the Van Allen belts. The Moon has no such field and is, for the larger part of its orbit, outside the Earth's field. There is no practical way to generate such a field around a lunar settlement.

Much of the radiation problem comes from the sun.

The Sun has major storms, called Coronal Mass Ejections (CME), which dump large amounts of radiation out into space. These space weather storms are associated with large sun spots and can do a great deal of damage to utilities on Earth, and to our satellites. These storms can be expected to hit a settlement on the Moon from 0 to 5 times a year.

Fortunately a wave of high energy electrons proceeds most solar storms. These particles will not penetrate even thin electrically conductive shielding and so are not very dangerous while they can provide good early warning. Satellites and lunar based equipment that monitor the sun can provide more advanced warnings. All equipment on the lunar surface must be designed to withstand these events.

The storms provide two distinct forms of radiation danger. First they put out a great surge of high energy particles that expand out at a substantial fraction of the speed of light. Our warning system will provide only 30 to 40 minutes of warning for this danger. Anyone caught out on the surface will be subject to a severe health threat. This danger only lasts a few hours.

This form of radiation is a special problem. It actually generates secondary radiation in the first layer of mass shielding. To protect against the high energy particles and the secondary particles they generate takes six to ten meters of regolith. Thicknesses less than six meters do not protect from Corona Mass Ejections.

The second form of solar radiation is the mass of ionized gas thrown out by the CME. Composed mostly of ionized hydrogen these clouds have a mass equivalent to a large mountain and are the source of the volatiles that may be mined from the lunar regolith. These storms follow a curved path so the ones that hit any site on the the Moon may not be the ones associated with direct radiation storms at that same site.

The good news is that we will have 24 to 48 hours warning about this form of radiation storm. They will then last 24 to 72 hours. These will be very dangerous for people doing outside operations but a thick regolith shield can provide acceptable levels of protection.

The Moon as Source

The Moon itself is a source of several types of radiation:

The lunar geochemical component KREEP contains trace amounts of the radioactive elements Thorium and Uranium. Regolith dust formed from this rock is a serious health hazard.

The radiation given off is Alpha particles (helium nuclei) and they do not penetrate very effectively. The direct radiation is stopped by any pressure vessel wall and even a well designed layer of spacesuit material. The problem is that if the dust is ingested into the human body, the particles will lay directly on lung or intestine tissue and are carcinogenic. Ingestion of the dust must therefore be rigorously limited.

KREEP is concentrated in the Oceanus Procellarum (Ocean of Storms) and Mare Imbrium (Sea of Rains) with a major concentration south of Crater Copernicus. This region covers about 40% of the Earth-facing side of the Moon. Based on the small number of lunar samples returned, low KREEP regions measure 8% or less of the radioactive elements in their dust compared to the high KREEP regions. With current technology, the entire high KREEP region is not acceptable for any long-term human settlement or manned mining operation.

The high KREEP region contains many sites of interest to science, particularly those of volcanic origin. Even short scientific expeditions there will require special procedures to prevent ingestion of dust and the removal of dust from all returning equipment.

Another source of dangerous radiation is the radon gas that is created in the decay of trace amounts of uranium found naturally in lunar rocks. This gas is very heavy and concentrates in low areas. This type of radiation is easily stopped by even a thin layer of material, but radon is carcinogenic if ingested directly into the body.

Even though sensitive scientific equipment has been able to detect radon on Luna, the quantity of radon gas is such that it can be ignored. The lunar atmosphere is so thin that the most massive component, Argon, is present in only 30,000 particles per cubic centimeter, that is 2 trillionths of a gram per cubic meter. Radon is so scarce that it is not even mentioned in the list of components in the lunar atmosphere article. See the Moon Fact Sheet from NASA.

Radon has also been detected from lunar outgassing events.