From Lunarpedia
(Redirected from Kreep)
Jump to: navigation, search

It is believed that approximately 4.5 billion years ago the earth suffered a cataclysmic collision with another solar body roughly the size of Mars. The disk of debris from this collision accreted over time to form a moon very different from the one we know today. The process was a violent one, resulting in an ocean of magma covering the entire lunar surface. Through the cooling of this ocean of magma KREEP was isolated from other lunar minerals, as explained below.

KREEP is a composite of what scientists term "incompatible elements": elements which cannot fit easily into the crystal structures formed by cooling magma and tend to separate out into the remaining liquid phase. This resulted in a KREEP rich magma sandwiched between the floating anorthositic plagioclase of the lunar crust and the precipitating minerals, such as olivine, that formed the mantle. Although it was common belief that this process would form an evenly distributed global layer of KREEP magma, the Gamma Ray Spectrometer aboard Lunar Prospector shows that KREEP is mainly concentrated in the area of Oceanus Procellarum and Mare Imbrium. This unusual geological region is now referred to as the Procellarum KREEP Terrane. Deep penetrating impact basins away from this region show only modest or no KREEP concentrations in their ejecta and rims. 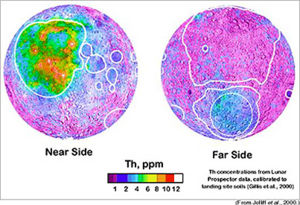 Thorium Distribution on the Moon. Note the high concentrations around the Procellarum KREEP Terrane. Thorium is a tracer for KREEP deposits. Click Image to Enlarge.

KREEP is kicked up in the ejecta or "splash out" produced in impacts taking place on or in close proximity to basaltic lava flows, as well as in major impacts which penetrate the crust. Some of this splash out was brought back by the Apollo 15 mission in fragments generally smaller than 1cm. These samples are believed to have originated after the impact which formed the Imbrium basin[1].

It is considered a convenient tracer for researchers seeking to chronicle the volcanic history of the lunar surface, as well as impacts of celestial bodies.

KREEP as an Ore

"On the Moon, elements have not been concentrated into what we would call ores through geological processing in the presence of water. We have instead "poor ores" if you can call them ores at all.

So wherever we find special concentrations, these are certainly places to consider in mining and processing operations. We will want to get beyond the new stone age on the Moon, and have a post-Flintstonian civilization :-)