Original Article can be found here.

Will Ants Replace Bees As The Solar Insect?

"Go to the ant, thou sluggard; consider her ways, and be wise: which having no guide, overseer, or ruler, provideth her meat in the summer, and gathereth her food in the harvest."

Bees--whether you love them or hate them are an important insect, contributing an enormous amount to our food supply.

Without them, many of the foods that we eat (and take for granted) would be in scarce supply, which would be devastating for millions of tummies (not to mention agricultural stock holders) around the world.

Like many creatures, bees are dependent upon Earth's magnetic field, which helps them navigate to and from their hive.

Unfortunately for humanity, global magnetic fields are a rarity throughout our solar system, as the only known "rocky" worlds hosting them belong to both Mercury and Jupiter's moon, Ganymede.

Unless humanity is able to create an artificial magnetic field that can cover the entire planet, future off world settlers will become heavily dependent on both Mercury and Ganymede to grow their "daily bread" (not to mention Earth as well). 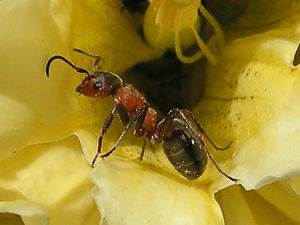 An ant patrolling a flower. Click Image to Enlarge.

In order to avoid this scenario, our species will probably have to look towards another creature to help us grow our fruits and flowers--which may mean that humanity may have to rely upon ants to help raise our food supply off world.

While colonists would probably object towards importing fire ants (or even those flesh eating kind), they may want to consider adopting ants as a means of pollinating their flower crops and trees.

Even though they lack "the buzz" of their black and yellow friends, ants nonetheless are known to pollinate flowers.

Since many fruit trees require pollination in order produce a crop, ants may be able to compliment off world outposts since these insects rely upon smell, and not magnetic fields to guide themselves across long distances.

Like their flying "cousins," some ant species are known to breed large colonies, which may make it easier for settlers to export numerous these creatures to other locations without the fear of depleting the original ant colony.

Despite the fact that when comparing apples to apples (note: no pun intended), bees far outstrip their dirt walkers when it comes to pollination (due to their flying ability), scientists may be able to train ants to aggressively pollinate plants grown off world, enabling future colonies to grow their own food supply instead of importing most of it from Earth.

Ants form a great group of social insects that are great lovers of nectar. These busy insects are often observed visiting flowers to collect energy rich nectar. Ants are wingless and must crawl into each flower to reach their reward. Ants are more likely to take nectar without effectively cross-pollinating flowers.

There is a rare category of flowers that have become adapted to ant-pollination.

The flowers that are visited by ants are typically:

Note that this does not apply to many tropical species. It may be possible to breed vegetable strains which will emulate aspects of flowers typically pollinated by Ants.