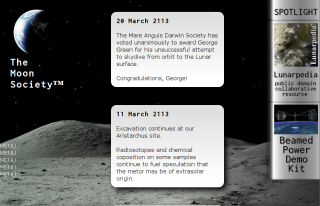 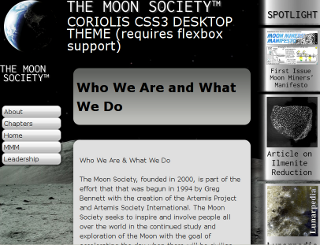 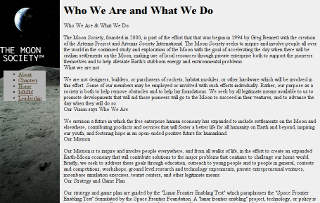 Coriolis is a web theme in development by Rose Dieteman, Scotty Gammenthaler, and James Gholston with some help from Mike Delaney for The Moon Society's 2013 site migration and upgrade.

It is based on Zen 5 for Drupal 7 with special attention to mobile device and legacy browser compatibility. 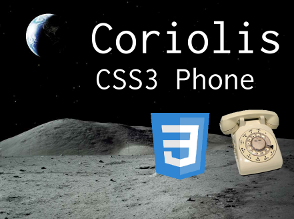 The original version of Coriolis has 11 component themes, all subthemes of Zen.

In many ways the reference, this is the default destination for every mystery browser known to handle at least CSS1. It uses a floated DIV layout and supports many CSS3 decorations. Its main problems are the ones inherent in a float-based layout. It is also the destination for versions of Opera below 12.10 and other browsers which can't do flexbox but are otherwise CSS3 level. The spotlight column will not appear on any actual CSS1 or CSS2 level browser as it needs @media queries to be enabled.

Like most of the other themes, there are duplicate DIVs for the menus and the spotlight. Only one is visible at a time, and only a browser with CSS3 level @media support can switch between the two.

Aimed at both telephones and tablets, this is a single-column layout. The assumption is that any CSS2 level tablet is not going to have enough resolution to properly mimic a desktop. In the event that a browser that is at least partially CSS3 capable is directed here, it provides many CSS3 decorations.

Originally a minor variant of CSS2 Desktop, this was modified to take advantage of CSS3's flexbox structuring. This will naturally break in any browser that can't support one of the forms of flexbox it uses, which is why only confirmed to be compatible browsers should be sent to it.

This is basically CSS3 desktop with bigger buttons.

This is a single-column theme with highly dynamic background selection.

The unpopular MSIE 6, typically used by people under the thumbs of BOFHs, preventers of information services, and pointy-haired school boards, this has a table layout and GIFs on its template graphics. As MSIE 5.5's capabilities are almost indistinguishable from 6, it comes along for the ride despite being a museum piece. It benefits from work on filters that it wouldn't have developed for it if it was the only browser that needed Microsoft's proprietary CSS3-ish decoration implementation that dates to MSIE 4.

This ended up being mostly the MSIE 6 theme with PNG images and is an artifact of how Coriolis 1.0 progressed.

Used by MSIE 8 and 9, this forces square contentboxes and buttons as MSIE 9 can't be trusted to handle both rounded corners and gradients. It is structurally a variant of CSS2 Desktop.

One of the oubliettes, this one only receives things deliberately sent to it. Hence, it is the least feature-capable of the component themes. The most popular (and only current) browser that gets sent its way is Dillo, which is the default browser bundled with many lightweight Linux distributions. It is also the destination of MSIE 3 through 5.0, Netscape 3, and the dreaded Netscape 4. It has no external stylesheets at all and only includes carefully targeted CSS statements directed at MSIE and Netscape 4. This is also the most visually distinct theme, as it has a 'bookmark' on the left and a light gray background instead of the full image background.

This is structurally CSS2 Desktop with the redundant element ripped out, as several things sent here never heard of CSS. Only browsers sent here by mistake that can understand @media at a CSS2 level can unlock the CSS decorations and structure. It does not use coriolis-defaults.css or coriolis-contentbox.css. Its pneumonic image for the admin theme menu is logo for NCSA Mosaic, the web browser that first popularized the web. In actual use, unidentified top-end browsers have consistently ended up here, which is why handling for these situations is being done differently in Coriolis 1.1

A single-column version of Dropoff, it also lacks the redundant sections needed to reconfigure itself. This may only receive browsers that Mobile_Detect recognizes that Browscap doesn't. Its pneumonic image for the admin theme menu is the logo of the organization that created PocketWeb, the earliest known mobile web browser (for the Apple Newton).

The Dropoffs are intended to be maximally compatible with the most severe legacy cases but also include CSS decorations for web browsers that we simply failed to identify.

Having been in place for 18 months it's time for some improvements. Also, the databases used for most browser identification have proven to be unreliable, and this needs to be accommodated.

While not part of Coriolis itself, other website improvements that are wanted include fixing the caching problem and improving the main page,