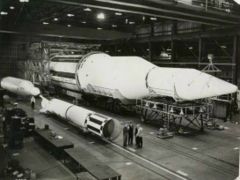 Juno, Mercury Redstone, and Saturn I rockets. This photo was taken during preparations for a visit from JFK.

At the Marshall Space Flight Center (Redstone Arsenal), Huntsville, Alabama, the moon space race with the Russians was well underway in 1962. The Manufacturing Engineering Laboratory of the Research and Development Operations, was very busy building the Saturn rockets. The Engine Unit, where I worked in the Planning and Engineering Branch, was moved from Headquarters Building 4712 to the Missile Assembly Shop Mezzanine in Building 4705. It was next to the Office of Max E. Nowak, Chief, of the Assembly Branch. The Engine Unit would to be closer to the work and assist Mr. Novak with engine problems better. The Mezzanine Offices over looked the shops below, which included the missile assembly line,other shops and the engine work area.

On Tuesday, May 15, 1962, I was in my Engine Unit Office, when Mr. Nowak and his Deputy Bruno K. Helm, came by and asked me to go with them to the engine area and look at the repair of an engine thrust chamber after a static firing test. Numerous cracks in the engine thrust chamber cooling tubes that make up the chamber itself, were cracking and a repair was developed for them. The cracks were cut out of the damaged stainless steel tubes and a patch was welded in and that was covered by a welded back up steel plate. If the weld didn’t hold, the “pressure vessel” created by the cover plate, would not let the hot gases leak out and would not be an explosive risk to man flight.

The engines were mounted on rotating work stands we designed with a large hand wheel with an adjustable counter balance weight that could be rotated in positions, to make work on the engine very assessable for technicians. We were looking how well the repair held up as the cracks became a huge problem and we were behind schedule because of it. We found that the repair worked great and now we could return to the schedule to beat the Russians to the moon.

As we examined the repair on the engine near the Missile Assembly Line, a large group of sixty-seven Seniors from the Susan Moore High School, of Susan Moore, Alabama, was on tour in the buildings. This school was in the middle of crossroads of America farming country, just eight miles from my home town, sixty-five miles South of Huntsville. My school played basketball and football with their teams.

The tour guide stopped the group between us and the assembly of a Saturn I rocket. A MSFC speaker begin to talk to the young and inquiring future Americans. We were held spellbound by the words of the speaker. I asked Bruno Helm, “Who is this guy?” “His name is Konrad Dannenberg, Technical Assistant to our R&D Division Director Hermann Weidner.“ Bruno said. We were very puzzled as to why our very busy Konrad Dannenberg was doing tours, which had became an everyday occurrence.

We stood frozen, listening to Dannenberg’s speech. He told the kids about how we were working hard toward winning the space race as he explained the Saturn C-1 vehicle to them. He urged the graduates to continue their valued education and help in the space race. Dannenberg told them about Auburn University’s Nuclear Center Program and the educational opportunities it would provide. Konrad Dannenberg’s beautiful address to these fine young Americans were most inspiring.

Mr. Novak, Helm and myself could not leave during the twenty minute speech. I wish all high school graduates could hear this great German Rocket Scientist speak. It was the first time I had know about Konrad Dannenberg. From that day forward, Dannenberg became a hero to many people. Bruno Helm said, “Now that we have been inspired, we need to rush back upstairs and solve the next problem.” Max Novak looks at us over his glasses for a moment and said, “Mr. Woodard is young enough to rush, but you and I will take our time.” We all laughed and went back to our offices feeling very good that we had solved a major problem that moved us a step closer to the moon and winning the space race. We were walking with a spring in our step, chest high and chin up from the great inspiring speech from Konrad Dannenberg. We knew America’s future was in good hands with those graduates. Konrad Dannenberg, 96, died February 16, 2009, in Huntsville, Alabama.