There is a difficulty in getting rid of heat on Luna. There is no ambient atmosphere to blow through a cooling tower and no water to evaporate. Condenser coils intended to radiate heat away into space should be protected from sunlight and from the ambient heat of the surroundings during the day. In the image of a cross section of a lunar radiator installation below, the radiator is located at 13 degrees north latitude. It is in a reflective foil lined, parabolic cross section ditch which runs east and west. 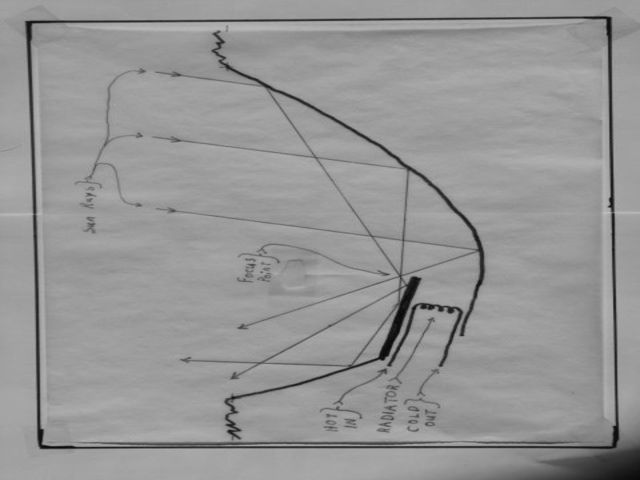 North is to the left and south is to the right. The images of sunrays projected orthographically into the image plane appear as lines near 13 degrees form vertical. They focus along a line that runs along the ditch and is represented in the image as its projection, the Focus Point. Sun Rays are all reflected away from the radiator at all times of day. A micrometeoroid shield protects the radiator from impacts that could cause leaks of radiator fluid. Such leaks would be expensive on Luna. If conduction cooling by contact with slabs lining the ditch is insufficient to cool the parabolic mirror, the whole assembly; radiator, mirror and micrometeoroid shield; may need to be raised above ground level with the mirror blackened on its lower surface for passive radiative cooling to ambient temperature.

The radiating coil pictured would have a limited angle to which it could lose heat by radiation, but would not be exposed to either sunlight or the infrared radiations of the surrounding landscape. It would radiate into space at a temperature of about 3 Kelvin. So it could theoretically cool down to liquid oxygen temperatures without a refrigeration link. The pictured arrangement is only one of a number of concepts for radiators to be effective during the lunar daytime.

It is possible to mount a lunar radiator on an east-west running wall tilted away from the nearest pole at an angle from vertical equal to the local latitude. A small reflective awning at the top of the wall will always shade the radiator from sunlight because sunlight will always fall within 1.5 degrees of being in the plane of such a wall on the moon. A set of reflective louvers would allow infrared radiation to pass by reflection, but stop micrometeorites. Using this concept at 30 degrees from a pole with the radiator on the poleward side of the wall would allow the radiator much more exposure to the cold sky than to the hot landscape. This takes advantage of the fact that permanently shadowed areas can be artificially produced anywhere on the moon simply by the placement of awnings. Since there is no atmosphere to cause the averaging of the temperatures of near by locations on Luna, such areas should be able to achieve temperatures near the 26 K temperature Measured for a dark polar crater during local winter. The temperature of such a shaded area when used as a radiator depends upon the amount of heat that is dissipated through each square meter of radiator area.