What's in a name?

Making up good names is important to getting a project started. Giving thins a name makes them more real. Early adopters and enthusiast love an inside joke and will work just to make the name happen. If you have better names for things than I have bring them forward.

A bad name can kill a project. Our space station when through many redesigns and changed its name with each. Started out as Eagle and ended up as the International Space Station. I am sure it was that last name that killed it.

I fear the name is confusing. In Herbert's science fiction series, sandworms are desert-dwelling creatures. But they do not collect spice; they (sandtrout, the haploid form) create it. Eventually by-products of the production build up and explode in a spice blow that releases the spice onto the surface of the desert. The confusion comes from the existence in the Dune universe of large harvesting machines, much like those described here, which are not called sandworms. I wish I had a good alternate suggestion for you! Sdsds 03:20, 25 April 2007 (UTC)

Yes, calling this machine a harvester would be more correct, but not as much fun.

I have added a sketch of the cutting head at the end to show the three fold rows of large, sharp, hard teeth. I think that this type of front end, which is common for such machines on Earth, would justify calling the manchine a Sandworm.

I don't have a problem with the name, I am not familiar to the Dune books at all, But this thing reminds me of how Earthworms digest food. Maybe we could tone down the Dune referances, otherwise it is fine. T.Neo 10:18, 31 July 2008 (UTC)

A smaller harvester utilizing ilmenite reduction can be found here. Looks like a miniature version of a mining processor and reminds me of Ed McCullough's presentation at ISDC07 on the AIAA Shackleton study. - Jarogers2001 04:07, 1 August 2008 (UTC)

What is the advantage of a cutting head over a scoop that scoops up the upper layers of dust? The cutting head loooks like it would use up a horrible amount of power. T.Neo 12:21, 9 August 2008 (UTC) 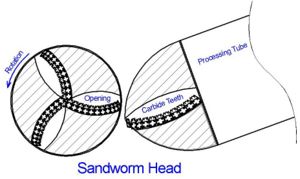 A scoop is a passive system, whereas the cutting head needs power to operate. My logic is that solar implanted volatiles like He3 are in the top layers of soil. This soil is loosly packed and fine. A scoop could scoop up these few upper centimeters. Any large stones would be sieved out. I think, unfortunatly, that the most effective way of preventing volatile escape during the heating process is to dump the regolith into a hopper, seal the hopper off, heat the regolith, remove the volatiles, and dump the regolith out the back, then repeat. I know this will not be continuous, but I find it the most sensible way to prevent volatile escape. T.Neo 07:39, 11 August 2008 (UTC)